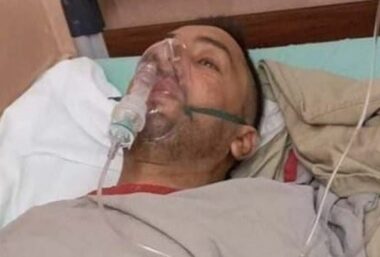 Updated: The detainee was released and was instantly moved to Beit Jala Governmental Hospital, near Bethlehem. His release came after three hearings within one week.

The Israeli military appellate court in Ofer prison, illegally built on Palestinian lands west of the central West Bank city of Ramallah, has decided to release a seriously ailing Palestinian detainee and ordered him to pay a bail of 12,000 Shekels (Approximately $3508).

Defense attorney Ahlam Haddad stated that the detainee, Nidal Abu ‘Ahour, 46, will be released during the evening hours, Tuesday, and will be directly taken by a Palestinian ambulance to a local hospital.

It is worth mentioning that Nidal suffers from kidney failure, cancer, serious respiratory issues, and previously had a kidney transplant, in addition to blood issues.

Abu Ahour was abducted by the soldiers on June 23rd after the soldiers stormed his home in Bethlehem. He is a former political prisoner and a married father of seven and has been held since then without charges.