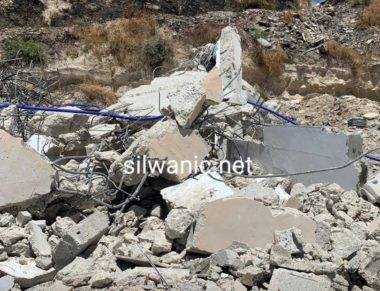 Israeli soldiers demolished, Wednesday, a Palestinian home in the al-Fool neighborhood in Beit Hanina, north of occupied East Jerusalem, only two months after the family of nine built it. The demolition came just hours before a court session was supposed to be held to discuss an appeal filed by the family.

Media sources said several army jeeps, and bulldozers, surrounded the neighborhood before invading it, and encircled the home of Sharhabeel Alqam, after closing and isolating the entire area.

Sharhabeel stated that he built the property two months ago to shelter himself and his family of nine, but the City Council of occupied Jerusalem decided to demolish it under the pretext of being built without a permit.

Permits are rarely issued to Palestinian families in occupied Jerusalem, and their costs are always very substantial, including the costs of just filing for a permit in addition to all other administrative paperwork, and the high costs of appeals after the permits are denied.

Medical sources said the soldiers shot a young man with a live round in the leg, before Palestinian medics rushed him to Palestine Medical Complex in Ramallah.

The soldiers also invaded and searched homes, before abducting a young man, identified as Mohammad Zayyat.

On Wednesday morning, the soldiers demolished a Palestinian home in the West Bank town of Betunia, west of Ramallah, in central West Bank.

On Tuesday, the Israeli authorities demolished a Palestinian home, in Silwan town in Jerusalem, under the pretext of the lack of a permit.