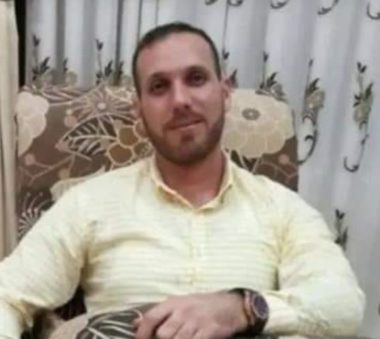 An Israeli court on Wednesday sentenced a Palestinian detainee to four life terms, in addition to imposing a fine of 16 Million Shekels after convicting him of killing two Israeli soldiers and of wounding 7 settlers (causing a young woman to miscarry) in two separate incidents in the year 2018, the Palestinian Prisoners Society (PPS) has reported.

The Israeli army abducted Assem Barghouthi, 34, on January 8th, 2019, and the soldiers continuously assaulted him until he lost consciousness before he was moved to the al-Maskobiyya interrogation facility, in occupied Jerusalem, where he was denied any visits, including with his lawyer.

The detainee was also shot with a live round in his leg during his abduction by the soldiers. He was interrogated for 14 days, and in many days of his interrogation, he was subjected to sleep deprivation, and multiple 20-hour interrogation sessions, which also included severe torture.

The Israeli army claims that Assem carried out a shooting attack, on December 9th, 2018, in which seven Israeli settlers were injured. One of those injured, a 21-year old woman, suffered a miscarriage as a result of being shot.

Israel also claims that his brother, Saleh Barghouthi, 29, participated in the shooting, and on December 12, 2018, the army extrajudicially assassinated him near Surda village, north of Ramallah, while he was in his car.

A few days after the Israeli army assassinated Asem’s brother, Saleh, he carried out a revenge attack, opening fire at Israeli soldiers in eastern Ramallah, killing two. Asem successfully escaped after taking a rifle from one of the dead Israeli soldiers.

On January 20th, 2019, Israeli soldiers invaded the family’s home in Kobar village, north of the central West Bank city of Ramallah, after surrounding it, and abducted the father of the two young men. Omar Barghouthi, 66, was sentenced to six months of imprisonment without charges, under the Israeli policy of ‘administrative detention’ in which Palestinians are held without charges in Israeli prisons,

On Thursday, March 7th, 2019, dozens of Israeli soldiers invaded Kobar village and demolished the Barghouti family home as revenge for the attack.

The soldiers also frequently harass Saleh’s wife and children , during invasions and violent searches of their homes in the village. This type of collective punishment of the family members of a suspect is a violation of international law.