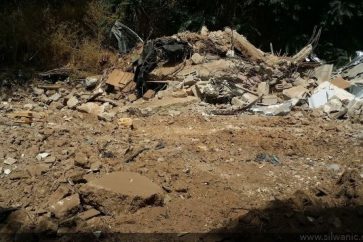 Israeli soldiers demolished, on Wednesday at dawn, a Palestinian home in Shu’fat neighborhood, north of occupied East Jerusalem, after surrounding and isolating it.

Eyewitnesses said dozens of soldiers invaded the neighborhood, before breaking into the home of Rajeh Mohammad Saleh Hawareen, and forced him along with his family out of their property.

Army bulldozers then proceeded to demolish the property, without allowing the family to remove all of its belongings and furniture.

The home was demolished so that Israel can pave a road linking between the illegal Israeli colonies of Ramat Shlomo and Pisgat Zeev, built on Palestinian lands in the occupied territories, in direct violation of International Law and the Fourth Geneva Convention to which Israel is a signatory and a constant violator.

The soldiers completely isolated the entire area, and prevented the Palestinians from approaching the property.

On Tuesday at dawn, the soldiers demolished two Palestinian homes in the Suwwana neighborhood, east of the city walls of occupied East Jerusalem, rendering 23 Palestinians homeless.