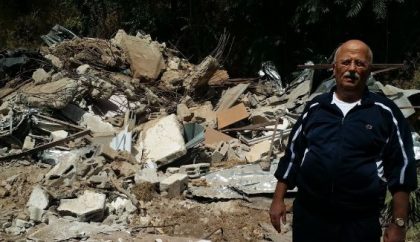 The Wadi Hilweh Information Center in Silwan (Silwanic) has reported that the city council claimed the homes were built without permits, and that they are located on lands designated by the state as “National Gardens.”

The families of Aref at-Totanji and Mazen Ghanem lived in the two demolished properties, Silwanic added.

Aref at-Totanji said the soldiers invaded his home approximately at 4 at dawn, nearly while simultaneously other soldiers invaded the home of Mazen Ghanem, and only gave the families a few minutes to leave the properties, without even removing all of their belongings, and that the army also assaulted several family members.

He also stated that he lived in his 80 square/meter property, along with 16 family members, including five children. The family moved in nearly 18 years ago.

“We were surprised today by their sudden attack, and the demolition of our home, without a prior warning,” Aref added, “The Israeli Central Court issued a demolition order in mid-March this year, but the decision was later frozen, and today they just swept in, and demolished it.”

The demolitions came after extended court battles, that were also meant for protecting 10 other homes, built on 27 Dunams that Israel confiscated from the Palestinians; at least half of the homes were built before Israel occupied East Jerusalem in 1967, and the others were built nearby twenty years ago.

The 27 Dunams are owned by the families of Totah and al-Ansari, but Israel managed to assign the lands are part of its “National Gardens” project, which means that the area in question became a “green area,” where no constructions are allowed.