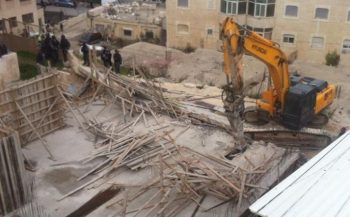 Israeli soldiers invaded, on Tuesday morning, the town of al-‘Isawiyya, in occupied East Jerusalem, and demolished an under-construction building, allegedly for being built without a permit.

The soldiers, accompanied by the police and undercover forces, gathered at the main entrance of the town, before invading several neighborhoods.

The soldiers then surrounded a two-story under-construction building, owned by Majdi Mustafa, and demolished it.

Mohammad Abu al-Hummus, a member of the Follow-Up Committee in al-‘Isawiyya, said the exterior walls and ceiling of the first floor were complete, while the family was still working on constructing the second floor.