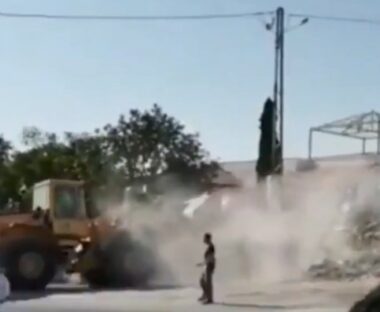 Local sources said the soldiers surrounded and invaded the area near the Hizma military roadblock, before demolishing the eight structures, owned by members of the local Khatib family.

Lawyer Midhat Theeba said the Central Court in Jerusalem denied an appeal filed by a colonialist organization, two months ago, demanding the demolition of the structures, however, it changed its verdict and issued a demolition order that was carried within eight hours, before the Palestinians could file any appeals.

Over the last few months, the Regavim colonialist organization filed lawsuits demanding the demolition of sixteen structures in Hizma, all owned by the Khatib family, and alleged that the structures are all within the boundaries of Jerusalem.

It is worth mentioning that Hizma, located in an essential area in the central West Bank, has a main road linking between the northern and southern parts of the occupied West Bank, and is subject to escalating Israeli violations, including attacks by the colonialist settlers, the demolition of homes and structures, in addition to the illegal annexation of private Palestinian lands for the benefit of the illegal colonialist activities.

Hizma is also surrounded by Geva Benjamin illegal colony in the northern part of the town, Pisgat Zeev and Neve Yaacov in the western part, and Anatot in the eastern part, in addition to the illegal Annexation Wall, which was built between 2004 and 2006, leading to the illegal annexation of thousands of Dunams of Palestinian lands.

In related news, the Israeli soldiers invaded Sebastia Palestinian town, north of the northern West Bank city of Nablus, before demolishing an agricultural room and bulldozing farmlands surrounding it.