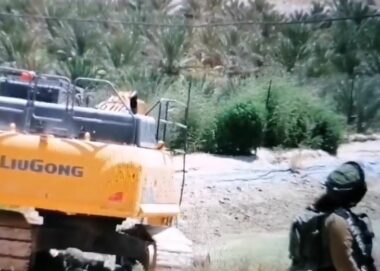 The army also demolished a pool, owned by Nasr Zubeidat, providing water to 50 Dunams of farmlands.

Earlier Wednesday, the soldiers demolished a 1400 cubic/meter irrigation pool in a palm tree’s farm, owned by Saleh Abu Hashem, in the al-Khazouq area in the northern part of Marj an-Na’ja village.

It is worth mentioning that the soldiers demolished several irrigation pools last year, under the pretext of being in what Israel claimed to be “state lands” (in the occupied West Bank), although the Palestinians have all needed deeds proving ownership.

Kayed Masoud, the head of Marj Na’ja Village Council, said the soldiers invaded a palm tree’s farm in the al-Khazouq area in the northern part of the village, and demolished the irrigation pool, owned by Saleh Abu Hashem.

Masoud added that the irrigation pool could hold up to 1400 cubic meters and provided the needed water to about twenty families of farmers.

The official stated that the attack is part of the ongoing Israeli violations targeting the Palestinians, their lands, and livelihoods, amidst its constant attempts to confiscate the Palestinian lands to use them for the illegal construction and expansion of its colonies, in direct violation of International Law and the Fourth Geneva Convention.

In related news, the soldiers confiscated two tents east of Yatta town, south of Hebron, in the southern part of the occupied West Bank.

On Wednesday at dawn, the soldiers abducted 29 Palestinians from several parts of the West Bank, including Jerusalem.