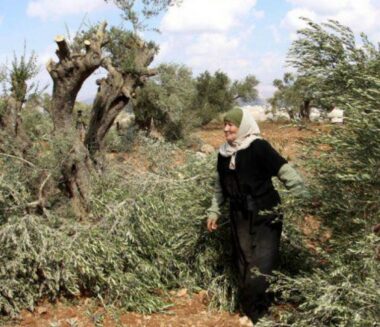 On Tuesday evening, Israeli soldiers demolished several tents used as school classrooms in a demolished school in Masafer Yatta and uprooted 50 olive trees in Birin village, near Hebron in the southern part of the occupied West Bank.

Fuad Al-Amour, the coordinator of the Protection And Steadfastness Committees in Masafer Yatta, said several army jeeps invaded Masafer Yatta before demolishing tents used as classrooms near the ruins of a school that was demolished by the army in the Khirbat Esfi Al-Foqa area.

Al-Amour added that the army demolished the school on November 23rd, 2022, before the Palestinians set up tents to resume the children’s educational process.

The area has been frequently targeted by the soldiers who uprooted trees, bulldozed farmlands, and demolished structures, in addition to the repeated attacks by the illegal Israeli colonizers against the Palestinians, their homes, and their lands.

Israeli soldiers also invaded the town and closed its northern entrance preventing the Palestinians from crossing.