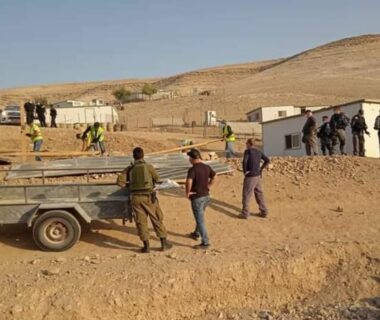 The head of the Land Defense Committee in the Sawahra town Younes Ja’far has reported that the soldiers demolished a 30 square/meter residential structure, owned by Skaker as-Sarkhi, near the road that links between the Sawahra town and Nabi Mousa archaeological site, near Abu Dis.

He added that the soldiers also demolished another residential structure, owned by Ismael Khalil Hathalin, near the Tahadi 2 School, in the al-Mintar area.

He added that the structure was near the illegal Kidar colony, and that the soldiers demolished it during an invasion into various surrounding areas. The structure is owned by Omar Suleiman, the son of a political prisoner held by Israel.

Israel has been targeting all Bedouin communities in the area to confiscate the Palestinian lands in order to build and expand its illegal colonies, built in direct violation of International Law.

It is worth mentioning that the army demolished the Wadi Abu Hindi Bedouin community in the late 1990’s, before the Palestinians rebuilt it, and has since been under the threat of demolition.