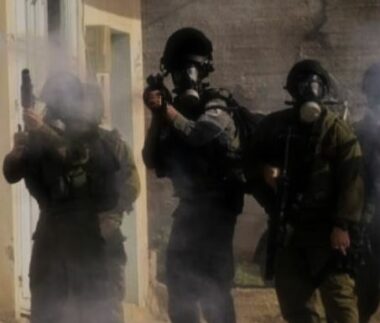 Israeli soldiers invaded, on Wednesday at dawn, the town of Jaba’, south of the northern West Bank city of Jenin, searched homes, and caused many Palestinians to suffer the effects of teargas inhalation.

Media sources said the soldiers invaded many neighborhoods in the town and fired gas bombs at locals, who protested the invasion, causing many to suffer the effects of teargas inhalation, including those in their own homes.

They added that the soldiers stormed and violently searched many homes, including those owned by former political prisoners, identified as Ahmad Fayez Salatna, Eid Mohammad Hamamra, and Mo’in Ibrahim Hamamra.

In related news, the soldiers invaded Tammoun town, south of Tubas in northeastern West Bank, before breaking into the home of Abdul-Qader Bani Odah, and violently searched it. Protests were reported during the invasion.