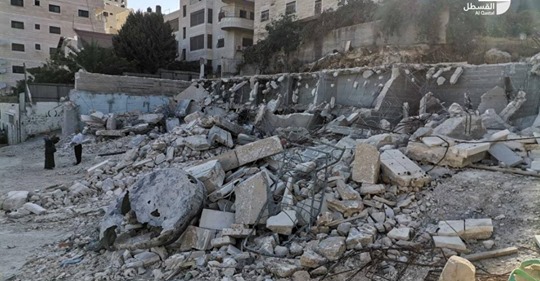 The sources pointed out that the Israeli police assaulted the family of Abu Ashraf as their home was being destroyed.

The pretext used by the occupation authorities was the lack of Israeli permits, according to Shehab News Agency.

It added that the Israeli police forcefully extracted the family from their home before razing it, denying the family to remove any of its possessions.

In related news, the Israeli authorities, on Monday, coerced a Palestinian civilian to demolish his own home in the Palestinian neighborhood of Beit Hanina in occupied East Jerusalem, the PIC reported.

Local sources said that the owner, Majed al-Salayma was forced to destroy his own home to avoid paying extensive fines to the Israeli municipality if they carried out the demolition.