Soldiers Demolish A Greenhouse Near Hebron 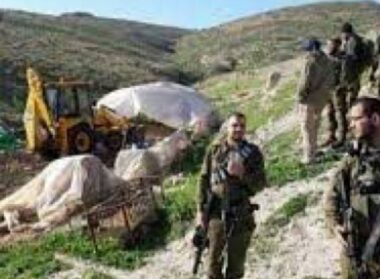 Israeli military bulldozers demolished, Tuesday, a Palestinian agricultural greenhouse at the entrance of the as-Sammoa’ town, south of Hebron city, in the southern part of the occupied West Bank.

Deputy Mayor of the town, Haroun Abu Karsh, stated that the soldiers, accompanied by a bulldozer, demolished a greenhouse, at the entrance of the town.

He added that the army alleges the structure was built near a bypass road heavily used by Israeli colonialist settlers.

The demolished hothouse, sixty square meters, was licensed by the Palestinian Agriculture Ministry, but the army claimed it was not licensed by the “Civil Administration Office,” the administrative branch of Israel’s illegal occupation of Palestine.