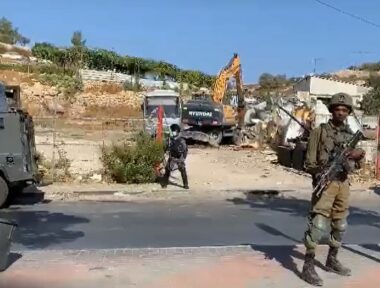 During the invasion, personnel of the City Council in occupied Jerusalem handed another Palestinian an order to self-demolish his house in the al-Bustan neighborhood in Jerusalem.

The Israeli authorities claim the structures were built without permits from the City Council; such permits are rarely granted to Palestinians, and are very difficult to obtain due to their excessively high cost.

Meanwhile Israel continues to build and expand its illegal colonies in the West Bank, including Jerusalem, in violations of International Law, the Fourth Geneva Convention in addition to various United Nations resolutions.