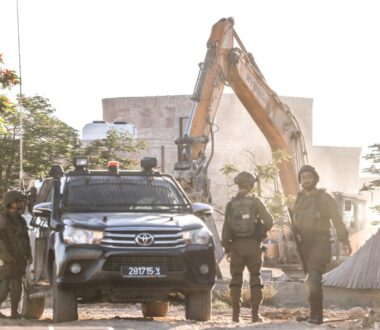 On Monday, Israeli soldiers invaded Palestinian lands near the Al-Awsaj Agricultural Cooperative Village and Natural Reservation, north of Jericho in the northeastern part of the occupied West Bank, before destroying a water network and fences.

Jihan Sarsawi, the media coordinator of Al-Awsaj, said several army jeeps invaded lands near the village, especially Basin #44, before bulldozing the lands and destroying a fence and a water network of farmland owned by Ahmad Hashash from Nablus, in the northern West Bank.

Sarsawi added that the soldiers confiscated the water pipelines and the fence before withdrawing.

In related news, the soldiers invaded the Al-Awja village north of Jericho before dismantling and confiscating seven tents out of fourteen.

The soldiers also confiscated agricultural tools and supplies from the tents after alleging that the tents “are in part in Area C of the West Bank.”

The tents were installed nearly a month ago and were used by Palestinian farmers and agricultural engineers.