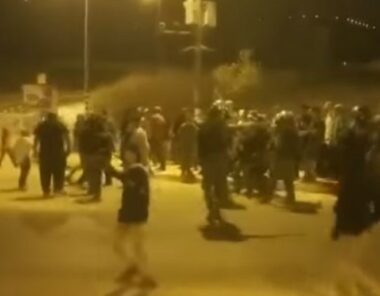 On Monday night, illegal Israeli colonizers assaulted and injured a Palestinian man in Huwwara town, south of Nablus, in the northern part of the occupied West Bank.

Media sources said dozens of colonizers invaded the town, assaulted the Palestinian, and maced his face with pepper spray.

They added that the wounded Palestinian, Maher Miladi, is from the Einabus nearby village and was driving through Huwwara when the colonizers attacked him.

The colonizers also closed the main Nablus-Qalqilia road and blocked all Palestinian traffic while Israeli soldiers just stood and watched.

Huwwara has been subject to daily violations and invasions by the illegal colonizers who assaulted many Palestinians and caused damage to shops and cars.

The colonizers also constantly hold provocative processions carrying Israeli flags, harassing the Palestinians in front of Israeli soldiers who are heavily deployed in the area.