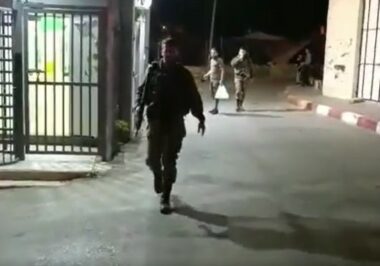 On Monday night, Israeli soldiers abducted a Palestinian in the center of Hebron city, in the southern part of the occupied West Bank.

Media sources the soldiers abducted Ziad Younis Abu Aisha while crossing a military roadblock near Jabal ar-Rahma Mosque and took him to a nearby military center.

They added that the soldiers closed the roadblock and prevented the Palestinians from reaching their homes in Jabal ar-Rahma and Tal Romeida neighborhoods, leading to a scuffle.

The soldiers also forced a Palestinian, who was filming Abu Asiha’s abduction, to leave the area and threatened to abduct him.

Also, illegal Israeli colonizers assaulted and injured a Palestinian man in Huwwara town, south of Nablus, in the northern part of the occupied West Bank.