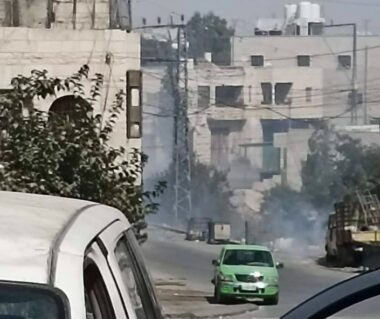 On Monday night, Israeli soldiers injured many Palestinians in the ath-Thaher area in Beit Ummar town, north of Hebron, in the southern part of the occupied West Bank.

Awad added that the soldiers fired gas bombs and concussion grenades at the Palestinian, causing many injuries, especially due to the effects of tear gas inhalation, including several residents in their homes.

The soldiers invaded many neighborhoods in the town and ordered Palestinians to leave the streets.

In related news, Israeli soldiers abducted a Palestinian in the center of Hebron city and took him to a nearby military base.

Also, illegal Israeli colonizers assaulted and injured a Palestinian man in Huwwara town, south of Nablus, in the northern part of the occupied West Bank.