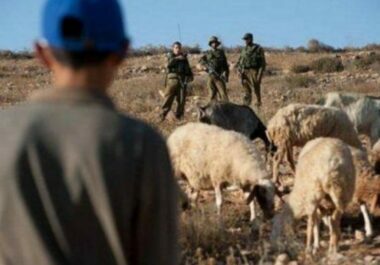 On Tuesday evening, Israeli soldiers invaded grazing lands in the Um al-Qaba Meadow, in the Northern Plains of the Jordan Valley in the occupied West Bank, and detained five shepherds.

Mo’taz Bisharat, a Palestinian official who monitors Israel’s illegal colonialist activities in Tubas, said the soldiers chased the shepherds while trying to force them out of the grazing lands and detained five.

The Palestinians in the area are subject to ongoing Israeli violations, including frequent assaults by illegal colonizers.

The Israeli army also frequently displaces Bedouin communities in the Jordan Valley and other parts of the occupied West Bank to conduct live-fire military drills.

These drills have led to massive destruction of lands and other property, burning hundreds of dunams of farmlands, displacing hundreds of Bedouin families, and causing dozens of casualties, including fatalities.