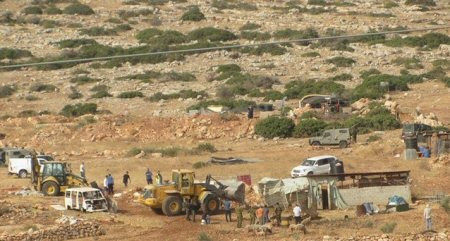 According to the Palestinian News and Info Agency (WAFA), Israeli forces, dismantled Palestinian residential and livestock structures in the Ras al-Ahmar area, on Monday.

The owner of the demolished structures, located south of Tubas, in the northern Jordan Valley, was identified as Saed Abu Zahir.

Abdullah Bisharat, head of Atouf and Ras al-Ahmar Village Council, stated that Israeli forces invaded Ras al-Ahmar, and proceeded to dismantle shacks and a barn, under the pretext of being built without a license.

Also of note was the fact that Israeli forces held researcher Aref Daraghmeh, 50, who was documenting the demolition, for at least an hour
and seized his vehicle, with the intent to intimidate him.

Destroying the property and livelihood of the Palestinians is in effect a means of forcible transfer. Article 49 of the Fourth Geneva Convention states; the occupying power is prohibited from forcibly displacing the inhabitants of the land it occupies.