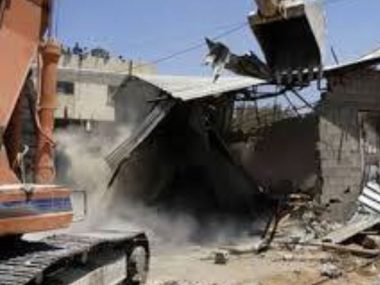 Israeli soldiers invaded, on Tuesday morning, the town of al-‘Isawiyya, in occupied East Jerusalem, before forcing a family of eleven out of their home, and demolishing it.

Media sources in Jerusalem said dozens of soldiers and police officers, including undercover soldiers, invaded the town, before breaking into the home of Saleh Abu Turk, and forced him and his family out of their property.

The sources added that the soldiers prevented the family from removing their furniture and belongings from the property, before demolishing it.

Abu Turk said a demolition order was issued against his property several months ago, but he went to court and managed to achieve a ruling delaying the demolition until February 08, 2017, in addition to being ordered to pay a 25.000 NIS fine, which he is still paying.

He added that after the scheduled demolition date passed, he never received any further order setting a new date, and the demotion was carried out without a prior notice.

The Palestinian lived in the property along with ten family members; six of them are children under the age of 18.

On Tuesday at dawn, the army demolished an under construction home in the al-Kharrouba area, in the al-‘Isawiyya town, under the pretext of being built without a permit.