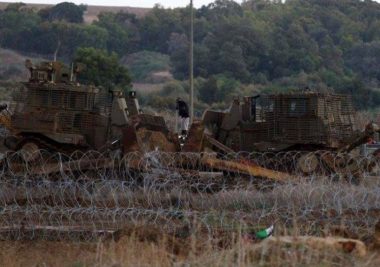 The Israeli army invaded, Friday, privately-owned Palestinian lands in Wad Rahhal village, south of the West Bank city of Bethlehem, and fenced them, in preparation for illegally confiscating them.

Hasan Brejiyya, the coordinator of the Popular Committee against the Wall and Colonies in Bethlehem, told WAFA Palestinian News Agency that the fenced Palestinian lands are close to Efrat illegal colony, built on private Palestinian lands.

He added that, besides isolating the lands, the fencing is also preventing other Palestinians from reaching their orchards.

Brejiyya stated that the latest violation is part of ongoing Israeli attempts to illegally occupying more lands and orchards in order to expand existing colonies, and for military purposes.

Wad Rahhal village has been subject to ongoing invasions, including violent searches of homes by the soldiers, especially over the last week.

The soldiers frequently install military roadblocks, before stopping and searching dozens of cars, and inspecting the ID cards of the passengers.