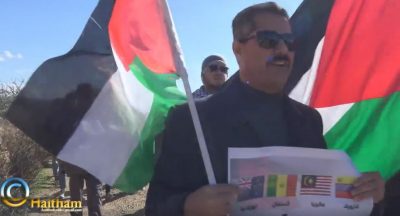 Many Palestinian, Israeli and international peace activists conducted, Friday, the weekly nonviolent procession against the Annexation Wall and Colonies in Bil’in village, west of the central West Bank city of Ramallah, also commemorating Jawaher Abu Rahma, who was killed by the army on January 1, 2011.

The Popular Committee in Bil’in said Israeli soldiers, stationed being the Annexation Wall, and on military towers, filmed the protesters, and demanded them to leave under the allegation that the area is a “closed military zone.”

This week’s protest commemorates the sixth anniversary of the death of Jawaher Abu Rahma, who died due to severe effects of teargas inhalation, after the soldiers assaulted a nonviolent procession in Bil’in, in addition to marking the 52nd anniversary of the establishment of Fateh movement.

The protesters marched carrying pictures of Jawaher, in addition to carrying flags of Venezuela, Malaysia and New Zealand, for pushing through the resolution at the UN Security Council condemning Israeli settlement.

They also chanted slogans calling for national unity, the release of all political prisoners and the liberation of Palestine.

It is worth mentioning that Jawaher is the sister of Bassem Abu Rahma, who was killed by the Israeli army, also during a nonviolent procession in Bil’in, in April of 2009.

She is also the sister of Ashraf Abu Rahma, who in 2008 was shot in his leg by a soldier, after he was bound and blindfolded, and was ordered to stand behind their vehicle. The incident was caught on film by a girl from Bil’in, and the soldiers later targeted her and her family.