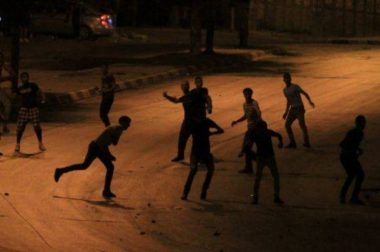 Israeli soldiers invaded, on Friday at night, Ya’bad town, southwest of the northern West Bank city of Jenin, clashed with many youngsters who hurled stones on the military vehicles, and abducted two young men.

He added that clashes took place in the town’s center, where the soldiers fired dozens of rubber-coated metal bullets, gas bombs and concussion grenades.

On Friday at dawn, the soldiers abducted two young Palestinian men, in the northern West Bank district of Jenin, and in the Hebron district, in the southern part of the West Bank.

Furthermore, the army invaded the towns of Beit Rima, Kafr Ein, and Birzeit, north and northeast of the Ramallah and al-Biereh District, in central West Bank, and searched homes.

Also at dawn, several Israeli military vehicles invaded the villages of az-Sawiya and Qaryout, south of Nablus, in the northern part of the occupied West Bank.