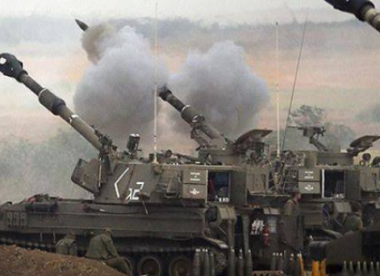 Israeli soldiers fired, on Friday at noon, at least six tank shells into a number of border areas, in the eastern part of the Gaza Strip, causing damage.

Media sources in Gaza said the soldiers fired missiles into a site, apparently used by an armed resistance group, in addition to several nearby areas, east of the Tuffah neighborhood, east of Gaza city.

The shells were fired while many Israeli fighter jets, and drones, were seen flying over various parts of the Gaza Strip.

The Israeli army claimed it was responding to shells, fired from Gaza into Sha’ar Hangev Regional Council of Settlements, and added that one shell hit a structure, and two others were intercepted by the Iron Dome system.

In addition, the soldiers attacked dozens of Palestinians who marched from al-‘Azza refugee camp, to the northern entrance of Bethlehem city, in the occupied West Bank.