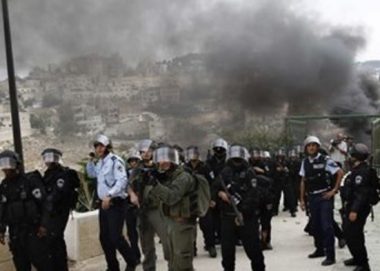 The army attacked dozens of protesters, who hurled stones and empty bottles at the invading soldiers who fired many live rounds, gas bombs, concussion grenades and rubber-coated steel bullets.

In addition, the army said that a female soldier was mildly injured after being “struck in her upper body with stones hurled by Palestinian protesters,” and was moved to Hadassah Medical Center, in Jerusalem.

The army stated it detained two Palestinians, “suspected of wounding the soldier,” and added that a protester also hurled a pipe bomb at a nearby Border Police base.

Furthermore, the soldiers surrounded many young Palestinian men in a building, and fired many live rounds at them, but they managed to escape before the soldiers stormed the property and occupied its rooftop.