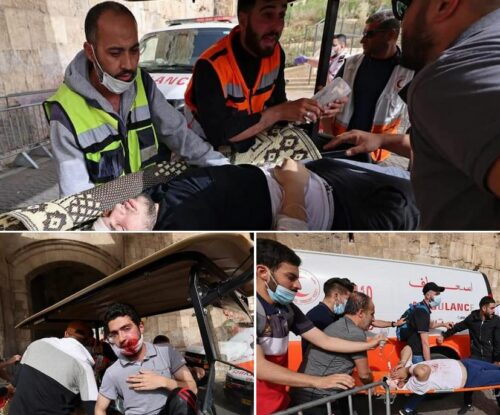 The Palestinian Red Crescent Society (PRCS) has reported, Monday, the Israeli soldiers injured, Monday, 612 Palestinians in several parts of the occupied capital, Jerusalem, especially in and around the Al-Aqsa Mosque compound, and many parts of the Old City. It added that the soldiers invaded the courtyards of the Al-Aqsa mosque, and broke into some of the mosques in the holy compound, causing excessive damage and many injuries, especially after the army assaulted and clubbed dozens of Palestinians, including women and children.

The Israeli army and the police also assaulted dozens of Palestinians in Bab al-Amoud and abducted many of them.

Sheikh Omar al-Kiswani, the director of Al-Aqsa Mosque, said the soldiers later withdrew from the hoy site compound and added that more than 3000 Palestinians remained in the mosque and its courtyard, determined to stay there to repel further invasions by the soldiers and the colonialist settlers. It is worth mentioning that the Red Crescent said the soldiers assaulted many medics, in addition to firing rubber-coated steel bullets, gas bombs, and concussion grenades at them, causing many injuries.