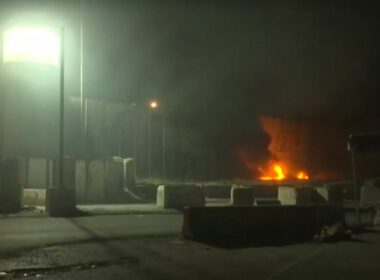 Israeli soldiers injured, Monday, nine Palestinians, and abducted three others, after the army attacked dozens of protesters near Qalandia north of occupied Jerusalem, who marched against the Israeli escalation in the Al-Aqsa Mosque, and injured nine of them, including one with live fire, in addition to abducting three others.

The Palestinian Red Crescent Society (PRCS) said its medics rushed a young man to Palestine Medical Complex In Ramallah after the soldiers shot him with a live round in the leg.

It added that its medics also provided treatment to eight Palestinians who suffered mild wounds after the soldiers shot with them rubber-coated steel bullets, in addition to providing first aid to many who suffered the effects of tear gas inhalation.

The Palestinians were marching from the al-‘Amari refugee camp and headed towards the Qalandia terminal while chanting against the Israeli escalation before the soldiers started firing at them.

Undercover Israeli soldiers infiltrated the protest and kidnapped three young men, who remained unidentified at the time of this report and took them to the Qalandia Terminal.

In addition, the soldiers fired live rounds, gas bombs, concussion grenades, and rubber-coated steel bullets at dozens of protesters in the al-Biereh city, near Ramallah.

It is worth mentioning that the PRCS has confirmed that the soldiers injured, Monday, 612 Palestinians in several parts of the occupied capital, Jerusalem, especially in and around the Al-Aqsa Mosque compound, and many parts of the Old City.

In the Gaza Strip, The Palestinian Health Ministry has confirmed, on Monday at night, that the Israeli army’s bombardment and shelling of the Gaza Strip, has resulted in the death of twenty Palestinians, including 9 children, and the injury of 95 others.