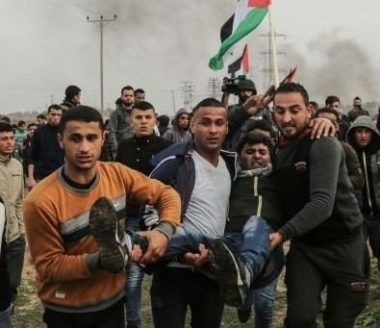 Israeli soldiers injured, on Saturday evening, a Palestinian child, and caused many others to suffer the effects of teargas inhalation, east of the al-Boreij refugee camp, in central Gaza.

Media sources said the soldiers, stationed near a gate of the perimeter fence, east of the refugee camp, fired a barrage of gas bombs at a group of children and young men, on Palestinian lands in the area, allegedly for “approaching the fence.”

They added that the child, only 13 years of age, was shot with a high-velocity gas bomb in his leg, while several others suffered the effects of teargas inhalation.

Also on Saturday, the soldiers killed one Palestinian, identified as Hamdi Taleb Sa’ada Na’san, 38, and injured at least 30 others, after a group of illegal colonialist settlers attempted to invade the northern part of the al-Mughayyir village, east of the central West Bank city of Ramallah, and were intercepted by the villagers.

On Friday evening, the soldiers killed a Palestinian teen, identified as Ayman Ahmad Othman Hamed, 17,  from Silwad town, east of the central West Bank city of Ramallah, and wounded another Palestinian, in addition to moderately injuring a young man in the ar-Reesan Mountain area, west of Ramallah.