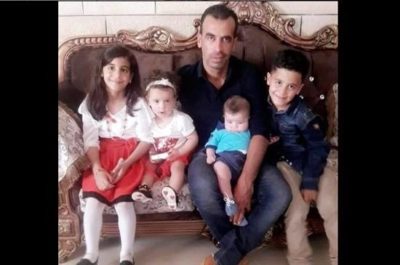 Illegal Israeli paramilitary colonialist settlers  killed, Saturday, one Palestinian, while soldiers and settlers injured at least 30 others, after they attempted to invade the northern part of the al-Mughayyir village, east of the central West Bank city of Ramallah, and were intercepted by the villagers.

The Palestinian Health Ministry said the Palestinian, identified as Hamdi Taleb Sa’ada Na’san, 38, was shot with a live round in his back, and the bullet was logged in the upper abdomen.

The Palestinian was rushed to Palestine Medical Complex, in Ramallah, but died from his very serious wounds.

Meanwhile, Israeli soldiers also injured at least thirty other Palestinians, among them six who were shot with live fire, including one who suffered a very serious injury.

One of the wounded Palestinians was shot with a live round in his mouth, before he was rushed to the Istishari hospital, in Ramallah, in a moderate-but-stable condition.

After the colonists attempted to invade the village, dozens of Palestinians, from the nearby Abu Falah village, rushed to aid the residents of al-Mughayyir, and were also attacked by the soldiers and the colonialist settlers, who fired a barrage of live rounds at them, preventing them from entering the village.

It is worth mentioning that Abu Na’san is a former political prisoner who was imprisoned by Israel for eight years.

The slain Palestinian man is a married father of four children, the youngest of which was born less than a year ago.

On Saturday at dawn, Israeli police officers shot and killed a  Palestinian man, after the officers opened fire at his car in Bab al-‘Amoud (Damascus Gate) area, in occupied Jerusalem.

The slain Palestinian has been identified as Riyad Mohammad Hammad Shamasneh, 37, from Qotna town, northwest of occupied East Jerusalem.

In a statement, Palestinian President Mahmoud Abbas denounced the seriously escalating violations, carried out by Israeli soldiers and the illegal colonialist settlers, against the unarmed Palestinian civilians, their homes and lands.

On Friday evening, the soldiers killed a Palestinian teen, identified as Ayman Ahmad Othman Hamed, 17,  from Silwad town, east of the central West Bank city of Ramallah, and wounded another Palestinian, in addition to moderately injuring a young man in ar-Reesan Mountain area, west of Ramallah.

|UPDATE : Israel Releases Body of Slain Palestinian After Being Held for 40 Days|