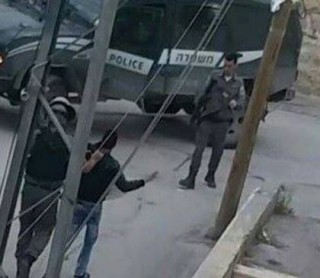 Israeli soldiers shot and injured, on Monday evening, a Palestinian child, in the al-Ram town, northeast of Jerusalem, and also kidnapped a young man from his home in the town.

The Red Crescent said the soldiers shot a child, 15 years of age, and prevented its medics from approaching him. He has been identified as Fuad al-Ja’bari.

The soldiers then assaulted the wounded wounded child, and took him to an unknown destination.

The extent of the child’s injuries remains unknown, as the Palestinian medics were not even allowed to get close to him. Initial reports indicate he was shot in his thigh.

The soldiers also assaulted a young man, while standing at the door of his home, and kidnapped him.