Israeli Soldiers Injure A Palestinian, Abduct His Son, In Jerusalem 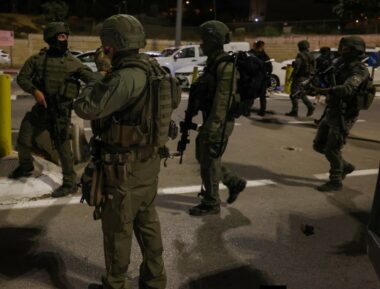 On Monday noon, Israeli soldiers invaded the Dahiat as-Salam area, northeast of occupied Jerusalem, and injured a Palestinian man before abducting his son.

Local nonviolent activist Mahmoud Elian said the soldiers fired concussion grenades at Abu Ali Salayma, wounding him in the abdomen when he tried to stop them from abducting his son, Ali, 24.

Elian added that the soldiers also assaulted the man, who suffered various wounds before Palestinian medics rushed him to a hospital in Jerusalem.

The soldiers also invaded the Ras Khamis neighborhood in the Shu’fat refugee camp, broke into and ransacked shops, and confiscated surveillance recordings and equipment.

In addition, the soldiers stormed and ransacked many homes in the refugee camp, and in Anata town, in addition to stopping, searching, and interrogating many Palestinians while inspecting their ID cards and forcing all shops and stores to close.