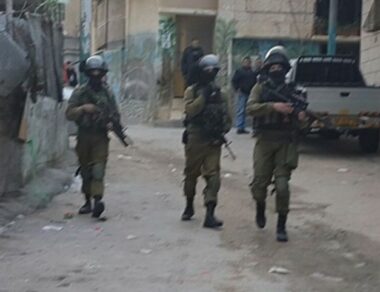 On Friday evening, Israeli soldiers shot a Palestinian teenage boy with a live round in the ‘Aida refugee camp north of Bethlehem in the occupied West Bank.

The sources added that the soldiers shot a teenage boy, 17 years of age, with a live round in the thigh before he was moved to a hospital in Bethlehem.

The soldiers also chased many Palestinians and closed the main street in the area, obscuring Palestinian traffic.

On Friday night, Israeli soldiers invaded a morning house Odai Kamal Tamimi, 19, who was killed by Israeli on October 19, 2022, near Ma’ale Adumim illegal colony, east of the occupied capital Jerusalem in the West Bank.