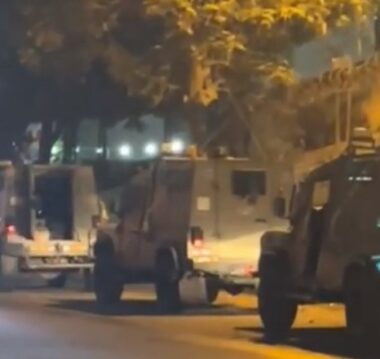 On Friday night, Israeli soldiers invaded a morning house of a young man who was killed by Israeli on October 19, 2022, near Ma’ale Adumim illegal colony, east of the occupied capital Jerusalem in the West Bank.

Media sources said the soldiers invaded the mourning house of Odai Kamal Tamimi, 22, set up by the extended Tamimi family in the Jabal Abu Romman area in the southern West Bank city of Hebron.

The sources added that the soldiers removed flags, posters, and national symbols from the house and surrounding areas.

The invasion led to protests before the soldiers fired many gas bombs and concussion grenades, causing many to suffer the effects of tear gas inhalation.

It is worth mentioning that Odai was killed by Israeli soldiers near the Ma’ale Adumim illegal colony, east of the occupied capital Jerusalem in the West Bank, after he opened fire at security guards, mildly wounded one.

The Israeli army said the Palestinian, from Shu’fat refugee camp, northeast of occupied East Jerusalem in the West Bank, shot a security guard, 24, mildly wounding him in his hand and added that another security guard at the scene fired at the Palestinian and killed him.