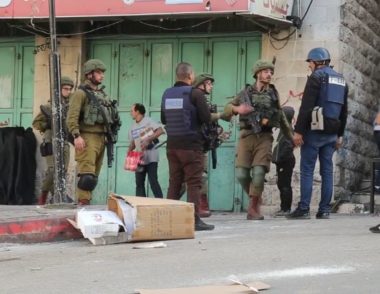 Media sources said the soldiers invaded Bab az-Zawiya area, in the center of Hebron city, before breaking and ransacking many homes, and occupied the rooftops of many buildings.

Many Palestinians protested the invasion and hurled stones at the soldiers, while the army fired a barrage of gas bombs, concussion grenades, and rubber-coated steel bullets.

Medics rushed to the area and provided the needed treatment to dozens of residents who suffered the severe effects of teargas inhalation.

In related news, a group of colonialist settlers, illegally squatting on Palestinian lands, attacked many cars at the entrance of Beit Anoun area, north of Hebron, causing damage.

Furthermore, dozens of Israeli soldiers were deployed in many areas around Hebron city, and several surrounding communities, and closed the main entrance leading to Sa’ir town, northeast of Hebron.

The soldiers also invaded the Sammoa’ town, south of Hebron, and abducted a lawyer, identified as Ayman Ahmad Abdullah, from his home.

The soldiers also attacked many protesters at the main entrance of the al-Fawwar refugee camp, south of Hebron, and closed its main iron gate.