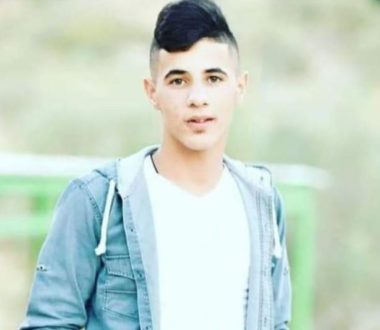 A Palestinian teenager was pronounced dead, Friday, shortly after he was shot and critically injured by Israeli occupation forces, north of Tulkarem in the occupied West Bank, said the Ministry of Health.

Bader Nidal Nafla Harsha, 19, was fatally wounded by Israeli soldiers during protests near the village of Qaffin, in the northern West Bank, on Friday evening.

The Palestinian Health Ministry has reported that the young man was shot with a live round in the main artery in his neck, and died from his wounds.

In a show of excessive use of force, Israeli forces resorted to the use of live ammunition, which penetrated the teen’s neck, striking the main carotid artery, resulting in his death only minutes later. He was rushed to Tulkarem governmental hospital where he was pronounced dead.

Bader was shot during protests that erupted near the illegal Israeli Annexation Wall, where many residents marched on their lands.

Soldiers have been deployed across the West Bank to suppress the protests of the Palestinian people expressing their rejection of the so-called ‘deal of the century’. This is the fourth Palestinian youth to be killed in recent days.