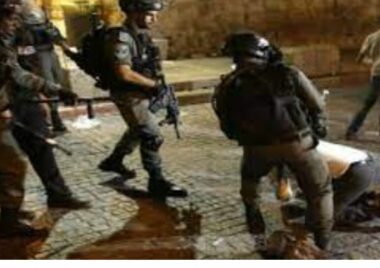 Israeli soldiers attacked, on Tuesday evening, Palestinian protesters across various parts of the occupied West Bank, including Jerusalem, and injured dozens of Palestinians, including journalists, in addition to abducting many Palestinians. Israeli colonists also attacked homes near Ramallah.

In Bethlehem, south of Jerusalem, the soldiers assaulted dozens of Palestinians who marched near the northern entrance of the city, in condemnation of the Israeli offensive on Gaza, and the violations in Jerusalem.

Eyewitnesses said the soldiers fired a barrage of gas bombs, concussion grenades, and rubber-coated steel bullets, causing dozens of injuries, especially due to the severe effects of tear gas inhalation.

They added that the soldiers chased many protesters, and abducted a young man, before moving him to an unknown destination.

The soldiers also assaulted many Palestinian journalists while trying to force them away to prevent them from documenting the protests.

Some of the journalists who were attacked by the soldiers have been identified as Reuters cameraman Mohammad Abu Ghaniyya, Palestine TV reporter Hani Fannoun, Baladna Radio camerawoman Safiyya Omar, and a Luay Sababa, a cameraman working for a Chinese news agency.

Also in Bethlehem, the soldiers shot a young man with a rubber-coated steel bullet in the leg and caused many to suffer the effects of tear gas inhalation, near the an-Nashash military roadblock, at the entrance of the al-Khader town, south of the city.

In occupied Jerusalem, the Palestinian Red Crescent Society (PRCS) said its medics provided treatment to 27 Palestinians, including five who required hospitalization, after the army attacked protesters in the Old City.

The soldiers assaulted, clubbed, and chased dozens of Palestinians near Bab al-Amoud and Bab as-Sahera, as they were leaving the Al-Aqsa Mosque in Jerusalem.

In addition, the soldiers attacked and maced many Palestinians with pepper-spray in the at-Tour town, in Jerusalem, before abducting four Palestinians, identified as Wa’el Abu Hatab, 48, Daoud Abu al-Hatab, 19, Mahmoud Abu Laban, 22, and Ahmad Kabaja, 20.

In addition, the soldiers attacked a Palestinian car at the newly installed military roadblock in al-‘Isawiya town, in Jerusalem, maced the driver and the passengers, and abducted them.

The Red Crescent in Jerusalem said the soldiers assaulted many of its medics while providing treatment to wounded Palestinians, near Al-Aqsa, and denied them access to the injured in the courtyards of the holy site.

In Nablus, in northern West Bank, the soldiers attacked protesters near Huwwara military roadblock, south of the city, and shot one with a live round before the Red Crescent medics rushed him to a nearby hospital.

The soldiers also abducted a Palestinian, identified as Mohammad Ibrahim Odah, 18, at the main road of Qusra village, south of Nablus, and injured several others.

In Qalqilia, also in northern West Bank, the soldiers shot at least three Palestinians with a rubber-coated steel bullet and caused 24 to suffer the effects of tear gas inhalation.

Four of the wounded Palestinians were moved to a hospital in Qalqilia for further treatment.

In addition, the soldiers attacked protesters near the Salem military roadblock and its army base, built on Palestinian lands, west of the northern West Bank city of Jenin.

The soldiers also shot four Palestinians with live fire in the lower extremities, west of Zeita village, north of Tulkarem, in northern West Bank, and caused many others to suffer the effects of tear gas inhalation.

In addition, a group of illegal Israeli colonists invaded Sinjil village, north of the central West Bank city of Ramallah.

Local sources said the colonists attacked homes owned by the families of Khalil, Asfour of Ghafri, near the bypass road before the Palestinians intercepted them.

They added that Israeli soldiers invaded the village and fired many gas bombs and concussion grenades at the Palestinians, causing many injuries.