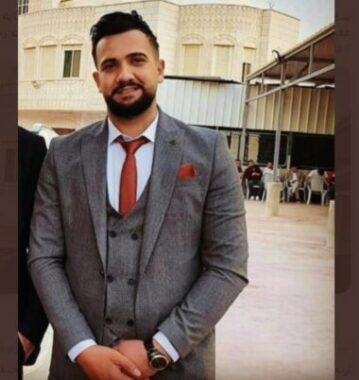 The Palestinian Health Ministry has reported that Israeli soldiers killed, on Wednesday at dawn, a young Palestinian man, and injured three others, in the al-Fawwar refugee camp, south of the southern West Bank city of Hebron.

The Health Ministry said the soldiers shot and Hussein Atiyya at-Teety, 26, a live round, in addition to injuring another young man with a bullet in the leg, and two others with rubber-coated steel bullets.

It added that the soldiers prevented Palestinian Red Crescent medics from entering the refugee camp, while at-Teety continued to bleed from his wounds before the locals rushed him to the hospital using a civilian car.

At-Teety continued to bleed and was officially pronounced dead after arriving at the hospital, despite constant attempts to revive him.

The injured Palestinians were rushed to the Red Crescent Clinic in Doura town, southwest of Hebron.

In Nablus, in northern West Bank, Israeli colonialist settlers hurled stones and attacked many Palestinian cars in Aqraba village, south of the city, and assaulted a young man, identified as Awad Nafez Bani Jaber in the eastern part of the village.

The colonists also attacked many Palestinians and cars in Qusra and al-Lubban ash-Sharqiya villages, in addition to near the Za’tara military roadblock, south of Nablus, and Jeet town junction, west of the city, causing damage.

Also at dawn, the soldiers abducted Samer Mahmoud Affana, 45, after storming his home and ransacking it in Qalqilia city, in northern West Bank.

In related news, the Palestinian Health Ministry has reported that the Israeli offensive on the Gaza Strip has led to the death of 35 Palestinians, including twelve children and three women, in addition to the injury of more than 233 Palestinians, until dawn hours, Wednesday.