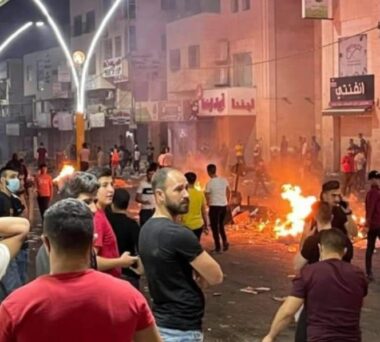 Israeli soldiers injured, on Monday at night, 32 young Palestinian men in Hebron city, in the southern part of the occupied West Bank.

The soldiers invaded the center of Hebron city and attacked dozens of Palestinians, protesting the Israeli escalation in occupied Jerusalem, especially against the al-Aqsa Mosque and its surrounding area, and the Israeli offensive on Gaza.

The Palestinian Red Crescent Society (PRCS) said its medics provided treatment to 32 Palestinians who were injured by Israeli army fire.

The PRCS added that five of the injured Palestinians were shot with a live round, 12 with rubber-coated steel bullets, and fifteen who suffered the effects of tear gas inhalation.

Another Palestinian was injured after falling from a high altitude while Israeli soldiers were chasing him.

In a statement, the Health Ministry in Hebron said all wounded Palestinians are in stable medical condition, including those who suffered moderate wounds.