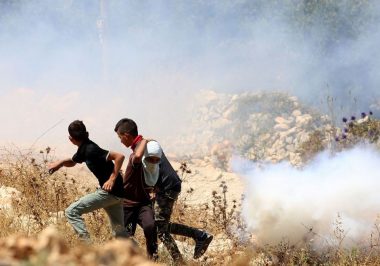 Israeli soldiers shot and injured, on Monday evening, five young Palestinian men with live fire, during clashes that took place after the soldiers opened fire on youngsters in Palestinian lands, close to the border fence, in various parts of the besieged coastal region.

The soldiers, stationed in military towers, and tanks, in the Nahal Oz base, across the border fence, fired many live rounds at Palestinian youngsters, including children, for “approaching the border fence,” built on Palestinian lands east of Gaza city, wounding one person in the leg.

Medical sources said the wounded Palestinian suffered a moderate injury, and was moved to the Shifa Medical Center.

Another Palestinian suffered a severe injury, after the soldiers shot him in the abdomen, east of Rafah city, in the southern part of the Gaza Strip. Medics rushed him to Abu Yousef Najjar Hospital, in Rafah.

Three Palestinians were also shot with live fire, east of Jabalia refugee camp, in the northern part of the Gaza Strip, and were moved to Kamal Adwan Hospital and the Indonesian Hospital, in nearby Beit Lahia city, suffering moderate wounds.

Clashes also took place east of the al-Boreij refugee camp, in central Gaza, and east of Khan Younis city, in the southern part of the coastal region, and the soldiers fired many live rounds, in addition to gas bombs.

It is worth mentioning that the army frequently opens fire on Palestinians, including farmers and workers, in their lands across the border fence, in the northern and eastern parts of the Gaza Strip, and against the fishermen and their boats in Gaza territorial waters.

The attacks have led to dozens of casualties, including many fatalities, in addition to resulting in abducting scores of Palestinians and confiscating their boats.

Also on Monday, the army invaded the al-Jalazoun refugee camp, north of the central West Bank city of Ramallah, and fired many gas bombs, causing several Palestinians from the same household, to suffer the effects of teargas inhalation.

In Bethlehem, the soldiers abducted a Palestinian teenage boy, in Teqoua’ town, east of Bethlehem.

In related news, the soldiers abducted a young man from the town of the ath-Thaheriyya, south of Hebron, in the southern part of the occupied West Bank, and detained another Palestinian from Hebron city.