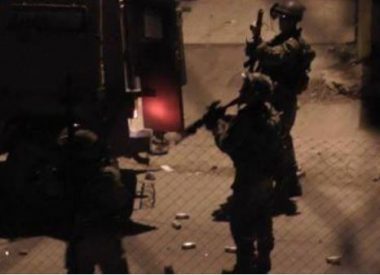 The Bethlehem office of the Palestinian Prisoners’ Society (PPS), in the occupied West Bank, has reported that Israeli soldiers have abducted, at dawn Monday, a Palestinian teenage boy, in Teqoua’ town, east of Bethlehem.

The PPS stated that the soldiers invaded and searched many homes in the town, and interrogated several Palestinians while inspecting their ID cards, and abducted Mo’men Rateb al-‘Amour, 17.

The soldiers also stopped and searched many cars, and interrogated several Palestinians while inspecting their ID cards.

In related news, the soldiers abducted a young man from the town of ath-Thaheriyya, south of Hebron, in the southern part of the occupied West Bank, and detained another Palestinian from Hebron city.