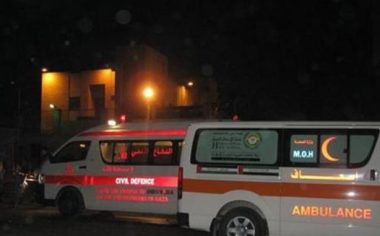 Israeli soldiers shot, on Sunday at night, five young Palestinian men on lands near the perimeter fence, east of Khuza’a town east of Khan Younis, and east of Rafah, in the southern part of the Gaza Strip.

The Palestinian Health Ministry in Gaza said the soldiers, stationed behind sand hills, and in sniper posts across the border fence, shot four Palestinians, east of Khuza’a.

It added that the injured Palestinians were rushed to Nasser Hospital in Khan Younis, suffering moderate wounds.

In addition, sources at Abu Yousef Najjar hospital in Rafah, said the soldiers shot a young man in the leg, causing a moderate injury.

In related news, the soldiers fired dozens of live rounds, and many flares, into areas east of Gaza city, and in Jabalia in northern Gaza, in addition to east of the al-Boreij refugee camp, in central Gaza.

Furthermore, an Israeli military drone fired a missile at Palestinians east of the al-Boreij refugee camp, but the missile did not explode.