US Expels Palestinian Envoy And His Family 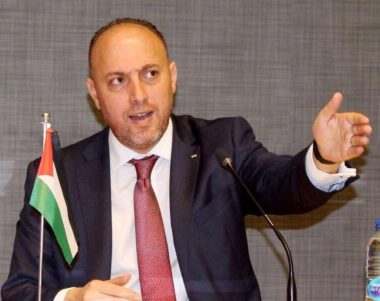 After shutting down the Palestinian Representative Office in Washington D.C., the Trump administration on Sunday ordered the Palestinian Envoy, Ambassador Dr. Husam Zomlot, and his family, out of the country, after cancelling their Visas and closing their US bank accounts.

Zomlot and his family, consisting of his wife and two children, age 5 and 7, were forced to leave the country immediately, without any chance to settle their affairs in Washington DC, where they have lived for years, and their Visas were valid until 2022.

The Palestinian envoy reportedly told the Lebanese Al-Mayadeen news outlet that “the American authorities cancelled my visa and my family’s visa and closed our bank accounts. We’ve been ordered to leave Washington immediately.”

Before the announcement that Zomlot would be forced to leave the country immediately, he had published this video on Twitter and Facebook saying that despite the U.S. Administration’s decision to close the Palestinian Representative Office, he hoped that the Palestinian and American people would remain committed toward building peace with each other over the long term:

Palestinian legislator, and member of the Executive Committee of the Palestine Liberation Organization, Dr. Hanan Ashrawi, responded to the U.S. decision to force the Representative out of Washington by calling it blackmail and vindictive.

She told the Palestinian News Agency WAFA, “As if the announcement that the U.S. would close our office in Washington D.C. was not enough, this vindictive action by the Trump administration is spiteful. The U.S. has taken its attempts to pressure and blackmail the Palestinians to a new level.”

Analysts say that this appears to be another move by the US to pressure the Palestinian Authority into surrendering and accepting the so-called ‘deal of the century’ outlined by Jared Kushner and Trump, which would deny the Palestinian people their right to self-determination, deny the existence of the vast majority of Palestinians, especially the refugees, and force the Palestinians to live permanently in razor-wire surrounded reservations under the control of the Israeli military with no chance to have a state of their own.

The U.S. State Department issued a statement claiming that the Palestinian Representative Office in Washington D.C. had a waiver that expired in November 2017, and that they have allowed them to operate since that time with the objective of working on a ‘peace agreement’.

The Trump administration refused to renew the waiver that allows the office to operate, thus rendering the status of 600,000 Palestinian-Americans in jeopardy – with no way to renew their Palestinian passports and other legal documents.