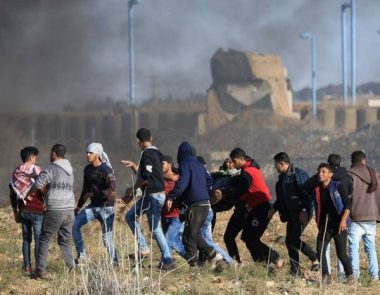 Israeli soldiers shot, Wednesday, four Palestinians with live fire, and caused many to suffer the effects of teargas inhalation, after the army attacked dozens of protesters on their lands near the border fence.

Medical sources said the soldiers shot and moderately wounded a young man with a live round in his leg, east of Jabalia, in northern Gaza, before he was rushed to the Indonesian Hospital.

They added that Israeli army sharpshooters also shot three Palestinians east of Khuza’a town, east of Khan Younis, in the southern part of the Gaza Strip, before they were rushed to Nasser Hospital and the European Hospital, in moderate conditions.