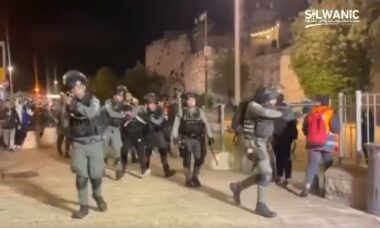 On Friday evening, Israeli soldiers assaulted and injured several Palestinians in the Bab al-‘Amoud area in the occupied Palestinian capital, Jerusalem, in the West Bank, and abducted three young men.

Several Palestinians were injured and received the needed treatment by medics of the Palestinian Red Crescent Society (PRCS). The medics transferred a wounded young man to a hospital for further treatment.

WAFA said dozens of soldiers and police officers were deployed in all areas surrounding the Al-Aqsa Mosque before assaulting several young men after leaving the mosque following evening prayers on the seventh day of the Muslim holy month of Ramadan.

It is worth mentioning that the soldiers and the police in the occupied capital have inured dozens of Palestinians and abducted at least forty in the first week of Ramadan.

The Wadi Hilweh Information Center In Silwan (Silwanic) said the soldiers stopped a Palestinian car in the Bab as-Sahera area and detained the passengers while searching it.