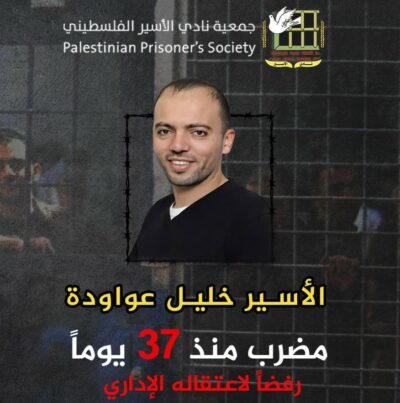 On Friday, hundreds of Palestinians held a nonviolent procession near Hebron, in the southern part of the occupied West Bank, in solidarity with a political prisoner who began a hunger strike 37 days earlier, protesting his arbitrary Administrative Detention.

Amjad Najjar, the head of the Hebron office of the Palestinian Prisoners’ Society (PPS), said the Palestinians marched in solidarity with Khalil Awawda, 40, who was held by Israeli without charges or trial under the arbitrary Administrative Detention orders.

Najjar added that hundreds of Palestinians marched al-Awawda’s hometown, Ethna, west of Hebron, in solidarity with him as he continues his strike and faces serious health complications.

“Awawda is a serious condition and was transferred to the infamous Ramla prison clinic that lacks physicians, especially specialists,” Najjar said, “Israel continues to deny professional medical treatment to dozens of ailing detainees, including those who are holding hunger strikes. Such policies violate Internal Law and all related treaties.”

The family of the hunger-striking detainee also announced it installed a protest tent in front of their home and called on international human rights and legal groups to intervene, stop the serious Israeli violations, and secure his release, especially since he is held captive without charges.

The protesters chanted for the release of all detainees, especially those held under the arbitrary Administrative Detention orders without charges or trial, and held Israel responsible for al-Awawda’s life, especially since he is denied professional medical attention.