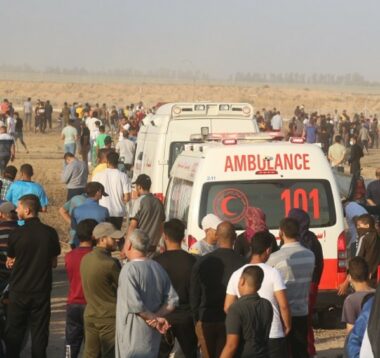 Israeli soldiers shot, on Tuesday evening, three young men with live fire, and caused dozens to suffer the effects of tear gas inhalation, during protests near the perimeter fence, east of the al-Boreij refugee camp, in central Gaza.

Media sources said the soldiers, stationed behind sand hills, and in fortified military barricades in military camps across the fence, fired dozens of live rounds and high-velocity gas bombs at Palestinian protesters, near the fence, east of the refugee camp.

They added that the soldiers also fired many flares while military drones also fired gas bombs at the protesters.

Medical sources have confirmed that three young men were shot with live fire, including one who sustained life-threatening wounds, and dozens suffered the effects of tear gas inhalation, in addition to cuts and bruises.

Shmueli, 21, was on duty as a sniper, shooting unarmed Palestinians, including children, who were gathered near the border wall.

The same day, according to the Palestinian Ministry of Health, Israeli soldiers shot and injured 41 Palestinian civilians, with live rounds and tear gas canisters, including a twelve-year-old child who was shot in the head. The child, identified as Omar Hasan Abu an-Neel, 12, remained in critical condition until he succumbed to his serious wounds on August 28th.