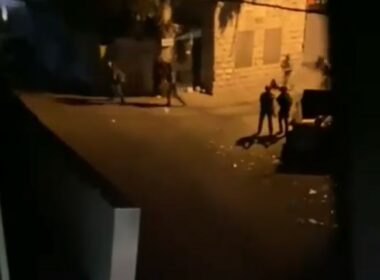 Israeli soldiers abducted, on Tuesday at dawn, eighteen Palestinians from their homes, in several parts of the occupied West Bank, the Palestinian Prisoners’ Society (PPS) has reported.

The PPS office in Tubas, in northeastern West Bank, said the soldiers invaded Tammoun town, northeast of the city, before storming and ransacking homes, and abducted Aahed Hamad Bani Odah.

It added that the invasion led to protests before the soldiers fired live rounds, rubber-coated steel bullets, and gas bombs.

In Ramallah, in central West Bank, the soldiers abducted Omar Shahin, 24, from his home in the al-Masayef neighborhood, after causing serious damage to his furniture while searching his home.

The soldiers also abducted Ahmad Nofal, 17, Bashar Nofal, 21, and Mohammad Samhan, 20, from their homes in the city.

In Bethlehem, south of occupied Jerusalem, the soldiers invaded several homes, before abducting Shaher Deeriyya, 20, from Beit Fajjar town, south of the city, in addition to Adel Fawzi Nawawra, 42, from the Saff Street in Bethlehem, and Raed Mousa Shu’eibat, 26, from Beit Sahour, east of the city.

The soldiers also summoned Hasan Hassanein Shouka, 33, for interrogation after invading his home in the Saff Street in Bethlehem.

In Hebron Governorate, in southern West Bank, the soldiers invaded and ransacked dozens of homes, before abducting five Palestinians, including the wife of a political prisoner.

The PPS office in Hebron said the soldiers invaded Doura town, south of Hebron, before abducted Hiam Rajoub, the wife of a political prisoner, identified as Salim Yousef Rajoub.

Furthermore, the soldiers installed roadblocks in many neighborhoods in Hebron, in addition to the main roads leading to Sa’ir and Halhoul towns, northeast, and north of Hebron city, before stopping and searching dozens of cars, and interrogated many Palestinians while inspecting their ID cards.