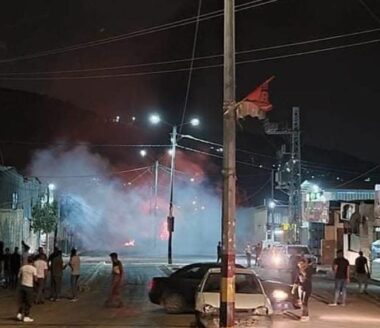 Israeli soldiers injured, on Saturday night, many Palestinians during protests that took place in Nablus, in northern West Bank, and in Ramallah in central West Bank, in central condemnation of the Israeli violations in the occupied capital, Jerusalem, including Al-Aqsa Mosque and Sheikh Jarrah neighborhood.

Media sources in Nablus said the Palestinians marched towards the Huwwara Israeli military roadblock, south of the city before the soldiers closed it in both directions.

They added that the protesters chanted for Al-Aqsa, Jerusalem, and against the escalating Israeli violations, before the soldiers fired rubber-coated steel bullets and gas bombs, causing several injuries.

In addition, the soldiers attacked a protest in Budrus village, west of Ramallah, as the Palestinians marched from the village towards the illegal Annexation Wall, separating them from their lands.

The protesters carried Palestinian flags and chanted against the escalating Israeli violations in Jerusalem before the soldiers fired gas bombs at them. The army also chased and assaulted several Palestinians with batons.