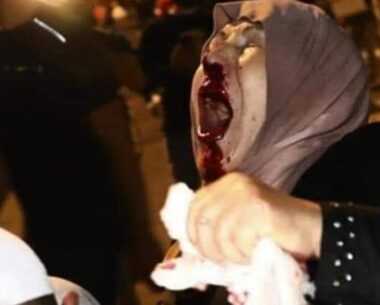 The Palestinian Red Crescent Society (PRCS) has confirmed that Israeli soldiers injured, on Saturday at night, at least ninety Palestinians, including women and children, in occupied the occupied Palestinian capital, Jerusalem.

The PRCS said the army attacked the Palestinians in Bab al-‘Amoud area, Bab as-Sahera, Bab al-Asbat, and in Sheikh Jarrah neighborhood, as dozens of residents were leaving the Al-Aqsa Mosque after dawn prayers.

It added that its medics rushed sixteen Palestinians to the al-Makassed hospital, in Jerusalem, in addition to 14 to a field a PRCS clinic, and added that most of the injuries were a result of Israeli rubber-coated steel bullets and concussion grenades, while the rest of the injured residents suffered cuts and bruises in addition to the severe effects of teargas inhalation.

PRCS medics also said some of the injured Palestinians are children, including a one-year-old girl.

In addition, the soldiers prevented many Palestinian ambulances from entering Bab al-‘Amoud and its surrounding areas, in addition to wounding at least one medic.

In related news, Israeli police officers attacked on Sunday at dawn, dozens of Palestinian worshipers while leaving the Al-Aqsa Mosque in the occupied capital, Jerusalem, wounding at least ten.

Furthermore, a father and his four children were injured after Israeli soldiers fired concussion grenades at them near Bab al-‘Amoud in Jerusalem.

On Saturday night, the army attacked many Palestinians in the Sheikh Jarrah, causing injuries, and abducted five.